INFOGRAPHICS: Cannabis vs Opioids – A Better Choice for Chronic Pain 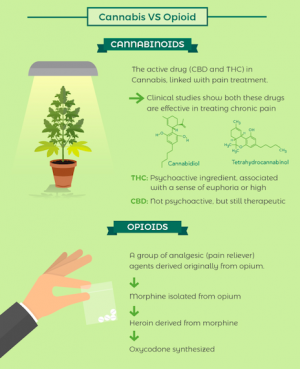 The infographic below presents the differences between opioids and cannabis, along with startling statistics, suggesting that medical marijuana is a very effective alternative to opioids.

Chronic pain is defined as pain that lasts longer than 12 weeks. It is important to recognize, however, that chronic pain doesn’t exist in a vacuum; many other symptoms and conditions are present alongside it, from sleeping problems to social withdrawal to a lowered immune system to anxiety, depression and many other issues.

Opioid prescriptions increased in the 1990s and since then, dependence and overdoses have become rampant. In 2015, opioid prescriptions were associated with 15,000+ deaths in the United States alone. In that same year, medical marijuana, on the other hand, had zero.

Part of this epidemic may in part be due to the misleading of the public; in 2007, three of the top executives from Purdue Pharma plead guilty to criminal charges for marketing OxyContin as safe and for minimizing the risk of addiction.

What we know now is that since 2010, opioid prescriptions have increased four times since the 1990s. While all of these numbers are startling, a study has shown that when patients used medical marijuana, the use of opioids and other pain medications decreased by as much as 64%.

RELATED:  What is a Medical Marijuana Card?