Is Smoking Cannabis Bad For Your Lungs?

As more and more countries are legalizing the recreational use of cannabis, some people wonder how good it exactly is for your health, especially the lungs. While there’s evidence that smoking cannabis can harm your overall health, researchers are still not sure whether smoking weed can have a dangerous effect on your lungs.

Here’s what we know so far about the effects of smoking cannabis on the lungs.

Effects of Cannabis on the Lungs

When you smoke weed, most of it is likely to spend its time on your lungs. Since weed is commonly smoked, it’s often compared to tobacco. Cigarettes can cause more harm than smoking weed, but that is not the case. Even though cigarette smoking causes more deaths each year, you can actually get more body damage if you smoke cannabis.

In case you didn’t know, smoking cannabis actually deposits up to four times of tar in the lungs as compared to cigarettes. This is because of the inhalation technique used when smoking weed. There are many different ways of consuming cannabis.

Still, the most common method used when smoking weed includes having the hold the smoke in your lungs for a much longer duration as compared to other smoked substances. This prolonged exposure enables the molecules in the smoke to settle into your lungs. The question is, does this bring about a long-term problem for your respiratory system, especially the lungs?

You have to know that your lungs are most comfortable when you inhale enough air. When you inhale smoke, it’ll bring about an inflammatory response from your respiratory system. Smoking cannabis can cause you to experience chest tightness, coughing, or wheezing. Also, smoking cannabis can cause swelling in your throat and shortness of breath. But when you stop smoking it, you can expect your symptoms to begin to improve, and eventually, all of them will go away completely.

Smoking cannabis can also cause existing lung conditions to become worse. If you have asthma, smoke from cannabis can cause a serious asthma attack which can even cause death if not given proper medical attention immediately. Cannabis smoking is strictly not recommended for anyone who has existing lung disease or problem. Furthermore, if you have an existing serious lung condition that needs a transplant, cannabis smoking can make you ineligible for a lung transplant.

Even those people who are considered heavy weed smokers reported that they experience frequent symptoms of bronchitis. It has also been reported that smoking a single marijuana joint is actually more damage to your lungs than five change-smoked cigarettes.

It’s because of this reason that people are developing new ways to smoke cannabis which is safer for the lungs. At Mooselabs, they’ve developed some interesting smoking tools which will not only ensure the safety of your lungs but also bring about a great smoking experience. 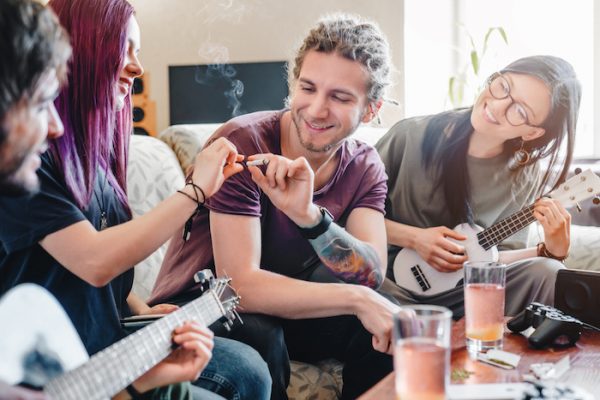 A lot of people are asking whether smoking marijuana can lead to cancer. There’s actually no proof that shows that smoking weed can cause lung cancer as cigarettes do. However, those people who are smoking weed do show signs of damage and even experience precancerous changes in their lungs, just like cigarette smokers do. The effects can even be more worrisome if the person also smokes cigarettes.

Just like cigarettes, smoking cannabis also contains carcinogens, which are cancer-causing chemicals. But as of yet, there’s no proven link that can be established between a significant increase in lung cancer incidence and cannabis smoking. THC and CBD, the two main active chemical compounds found in cannabis, are also said to possess anti-tumor capabilities. Researchers believe that this ability could be the reason behind the lack of lung cancer occurrence in heavy cannabis smokers.

Extensive research into cannabis’s effect on your lungs has not been completely thorough, though because for a number of reasons. In some countries, particularly in the US, cannabis is classified as a Schedule I drug, which means it is highly regulated by the federal government.

Because of it, researchers are having a hard time conducting research on cannabis. There is also the fact that a lot of people reported that significant long-term use of cannabis along with cigarette smoking had developed lung cancer. These kinds of factors distort the results of the study made by researchers and make it harder for them to draw conclusions.

But once the research is green-lit, researchers will be able to study cannabis more effectively, especially its effects on your lungs.

Cannabis smoke contains many of the same compounds that are found in cigarette smoke. Although there’s no proof yet that smoking cannabis can lead to lung cancer, you still have to be very careful when smoking a joint. Find other ways of smoking cannabis which is safer for the lungs, such as vaping.