We still cannot legally smoke weed in public but . . .Oregon lawmakers are anticipating the federal government legalizing, or at least tolerating, the interstate movement of marijuana. 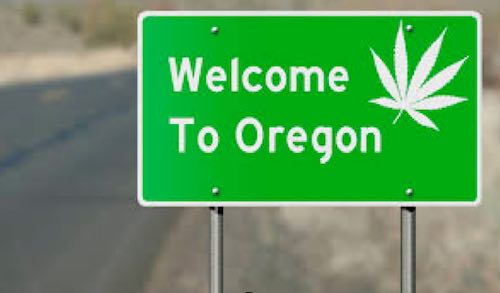 The Oregon Senate Judiciary Committee moved forward a bill this week empowering the governor to enter into agreements with other states for such transactions.

The bill, which was completely rewritten in an amendment, goes to the Senate floor for a vote, soon.

One of two Republican committee members, Sen. Cliff Bentz, who voted against the bill (not a big surprise [LOL]), said he prefers to wait for the federal government to take action before committing to this type of forward looking legislation.

Sen. Shemia Fagan, of Portland, who was among four Democrats and one Republican who voted in favor Wednesday, said it would give Oregon’s marijuana businesses a first in line advantage when the federal government opens the path . . . Not to mention help reduce the current over supply of cannabis.

The executive director of the Craft Cannabis Alliance, Adam J. Smith, which represents craft growers in Oregon, said he expects other states to follow Oregon’s lead and authorize interstate commerce if the federal government creates the opportunity.

Smith said his association is pushing “to open new markets for Oregon’s world-class cannabis in the near future!

There are a number of bills, currently, in the US Congress that would remove cannabis from the federally controlled substances list.

The future of the legislation remains uncertain, but even a decision by the Department of Justice to relax prosecuting interstate marijuana commerce would be enough for Oregon’s governor to start seeking cooperation with other states, according to the bill and its co-sponsor, Sen. Floyd Prozanski, D-Eugene.

Any agreement with other states must ensure enforceable public health and safety standards, and include a system to regulate and track the interstate transportation of marijuana and other cannabis items according to the legislation.

This writer feels confident the Feds will do the right thing and soon . . .

Author Bio: Robert Demes manages The Elite Growers. The Elite Growers was founded in December of 2016 as a premier medical marijuana grower. The farm is located in Brownsville, Oregon a rural farming area 25 miles Northeast of Eugene. As part of “giving back to Humanity,” they operate an animal sanctuary for orphaned farm animals.

Is It Legal to Purchase CBD? Check This Guide Before Buying

Blue Dream: The Cannabis Strain Everyone Is Talking About

How to Spend Less on Pot Without Cutting Down

Why You Should Choose Edibles Instead of Smoking Weed

Where Can I Buy Delta 8?