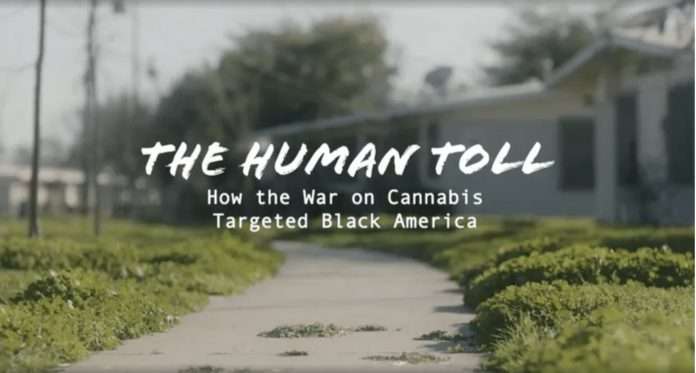 Check out the Vanity Fair and PAX Labs-produced documentary series, The Human Toll: How the War on Cannabis Targeted Black America – Part 1 Below:

Produced by Vanity Fair with PAX Labs | Wars cannot be waged on things, they can only be waged on people. This three-part docuseries delves into how U.S. drug policy — and specifically cannabis prohibition — over the last century has been a driver of racial inequality, unjust incarceration, and devastating harm to communities and people of color. In Part One, leaders from the Last Prisoner Project, Marijuana Policy Project, Law Enforcement Action Partnership and Brookings Institution uncover the racist origins of the war on drugs and explain how these dangerous policies, dating as far back as the early 1900s, have shaped our carceral system to this day. Explore more of this series with PAX Labs:

Part One: The War on Race

Part Three: Getting Out

The three-part, Øcean Vashti Jude-directed project, which features LPP’s Natalie Papillion and Evelyn LaChapelle, as well as constituents Corvain Cooper and Michael Thompson, dives into the racist origins of the so-called ‘War on Drugs’.

This docuseries explores how marijuana prohibition has transformed American policing, fueled mass incarceration, and exacerbated racial injustices and inequities. In conjunction with the series release, PAX Labs is also highlighting the stories of system-impacted individuals, including Corvain Cooper, on their blog.

Watch the first installation of the docuseries, which also features celebrated drug policy scholars and advocates from the Marijuana Policy Project, Law Enforcement Action Partnership, and Brookings Institution on the Vanity Fair website. And stay tuned for Parts II and III, premiering later this month.

Tahir Johnson: The Importance of Social Equity, Inclusion and Justice in the Cannabis Industry