Article reposted with permission from Tvape

Last year we conducted a survey with the goal of gathering consumer perceptions on issues surrounding smoking vs vaporizing. The survey had a good turnout with around 700 responses which you can find here so we decided we’d do another one to cap off the year. This time however we tossed in a few more questions to get a more in-depth look at how vaporizing is perceived to be as a less harmful alternative or “better” alternative to smoking.

We also ran a little experiment to serve as a visual representation to observe the effects of vapor vs smoke when it passes through your lungs. Please do keep in mind that we are not doctors nor are we making any medical claims. Feel free to draw your own conclusions from the demonstration. The experiment was conducted using a Zeus Arc GTS, a 3rd generation vaporizer.

In a similar vein, there has also been peer reviewed evidence that Heat and Burn, a technology similar to vaporization that is used to consume tobacco yields lower levels of exposure to harmful secondhand emissions for both users and bystanders.

This year’s survey however aims to dig a bit deeper into consumer opinions and perceptions for a more holistic view of vaporizing. We got over 400 responses this time around and the general consensus hasn’t really changed; those who responded to the survey view vaporizing in a positive light compared to smoking, especially where effects on one’s health and general well-being are concerned.

For the purpose of keeping things simple, the data is sorted by rankings: 1-4 would be considered disagree, 5-6 are neutral, and 7-10 are agree. We’ll be running through the results right down below:

Vaping and How it Impacts Health 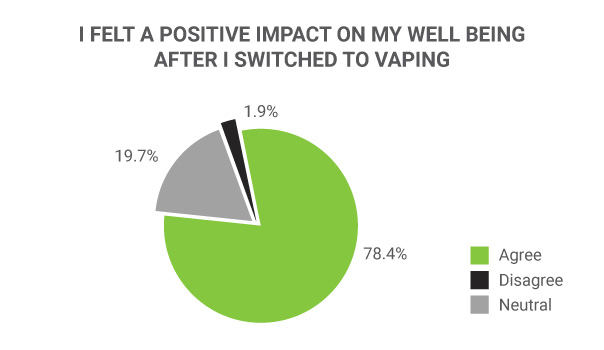 78.4% of those who answered the survey said they felt an overall improvement on their well-being after making the switch from smoking to vaping while less than 2% feel that making the switch yielded no benefits whatsoever. 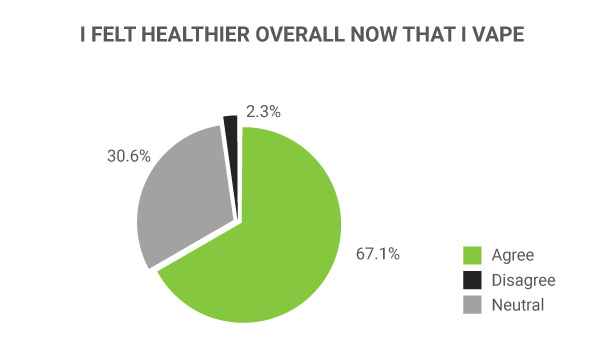 A majority of those who switched from smoking to vaping agreed with this statement with 67.1% reporting that they felt healthier since they started vaping. 2.3% disagreed and 30.6% remained unsure or neutral on vapings impact on their health. 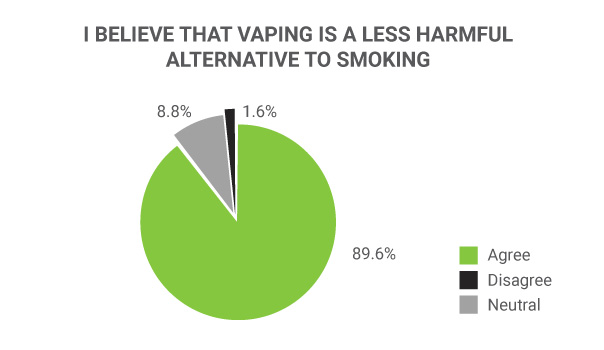 89.6% strongly feel that vaping is indeed a less harmful alternative to smoking dry herb which correlates to the above davZta where the majority have noted an improvement in their overall health. 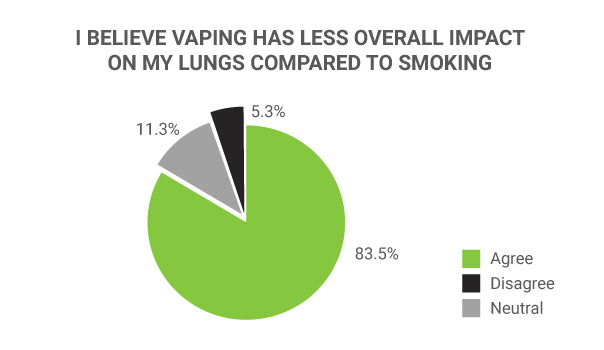 Diving into the specifics of how consumers view the impact of vaping on their health, 83.5% of the respondents feel that vaping has less effect on their lungs compared to smoking. While this is anecdotal, the effects of one’s lungs or respiratory functions are easily felt without a proper medical diagnosis. 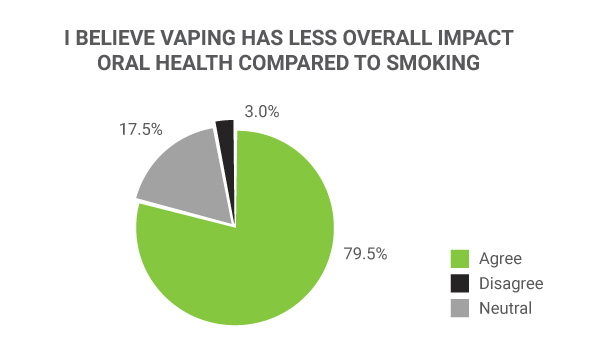 It’s no secret that smoking in any form is usually detrimental to one’s oral health.  In contrast to this, 79.5% of those who answered the survey have noted that vaping does not have the same impact or effect as smoking. 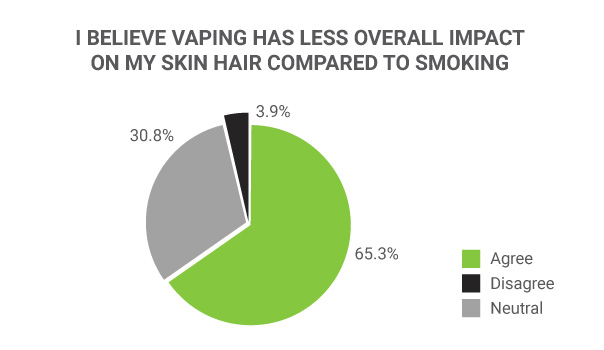 Reduced collagen production is typically one of the hallmark effects of smoking. This results in drier or less elastic skin.  65.3% feel that they noticed a  noticeable uptick in the overall health of their skin and hair after making the switch from smoking to vaping. 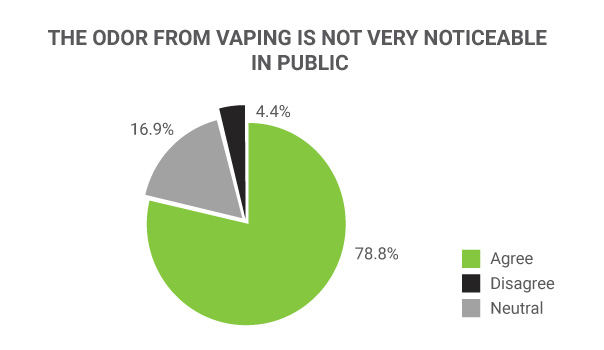 From a bystander’s perspective, probably one of the most disliked aspects of dry herb consumption is the resulting odor produced when smoked. In the survey, a majority of 78.8% percent agree that vaping dry herb produces a much less noticeable odor. 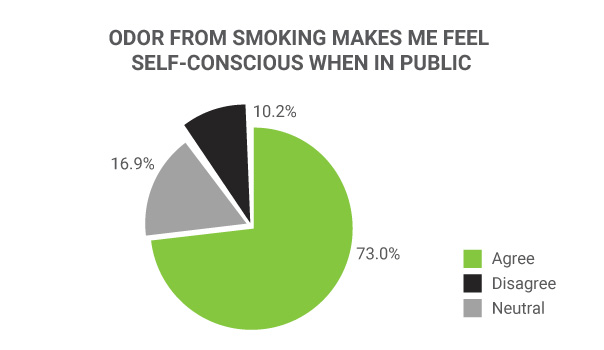 73% of respondents in our survey agreed that the odor produced from smoking makes them feel self-conscious when done in public. Only 10.2% disagreed with this statement while 16.9% remained neutral or unsure.

Vaping and Those Around You 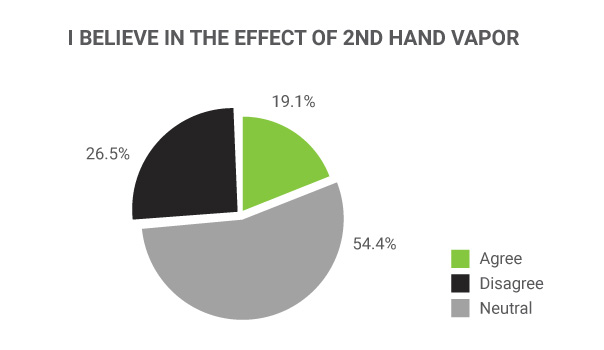 The majority of those who responded to the survey were unsure or undecided with 54.4% taking a neutral stance. Only 19.1% agreed that 2nd hand vapor does in fact have an effect while 26.5% disagreed with this stance. 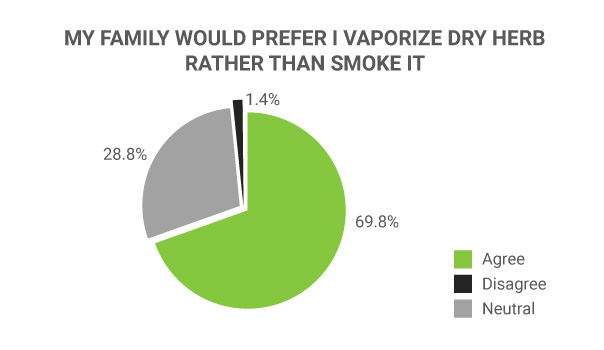 The survey states that 69.8%  family members preferring vaping over smoking could also correlate to the data above. The diminished odor produced by vaporizing dry herb hints that it might be a more tolerable option for those exposed to dry herb, but do not consume dry herb at all. 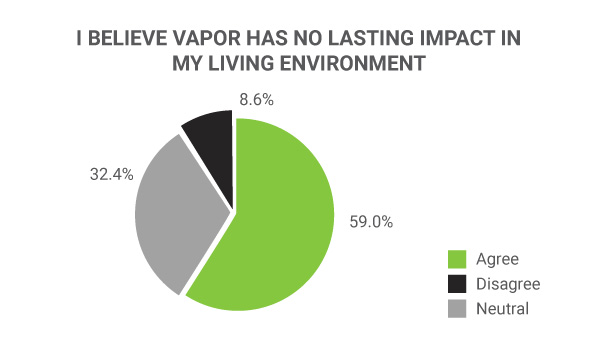 59% agreed that vaping does not leave a long lasting effect in their living space can most likely be attributed to the lack of odor produced that can cling to surfaces. 32.4 of respondents remained neutral while 8.6% strongly disagreed with this statement

Is it Easier and More Affordable to Vape? 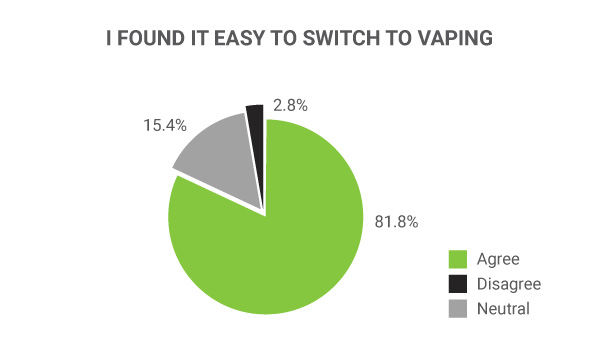 A strong 81.8% agree that making the switch over to vaping dry herb from smoking was easy. While there are a few possible factors for this such as ease of use or affordability, the general consensus is that vaping is highly accessible for those that wish to make the switch. 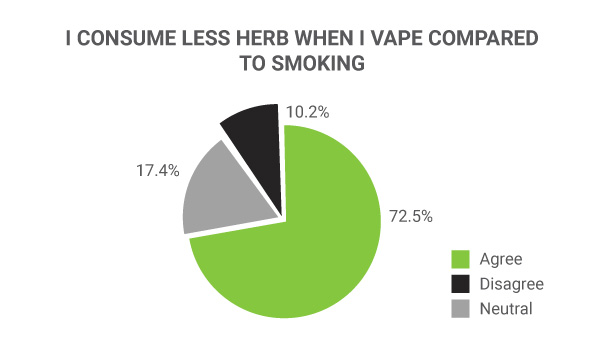 In terms of economics, this also suggests that vaping is the more accessible option compared to smoking. Moving past the upfront cost of purchasing a dry herb vaporizer, 72.5% of users who answered the survey have noted a decline in overall dry herb consumption when vaping which would result in reduced costs in the long run. The survey results here also agree with the idea that consuming less herb equates to saving more money when switching over to vaporizing. 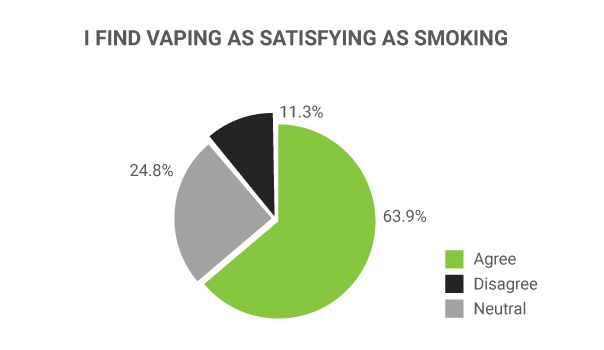 63.9% of responses from the survey have noted that vaping is on par with smoking as far as overall satisfaction is concerned with 11.3% in disagreement. This is probably the best indicator of advancement of vaping technology-wise over the years. As more affordable and higher powered vaporizers enter the market, this would indicate that dry herb extraction has become more efficient and potent over time . 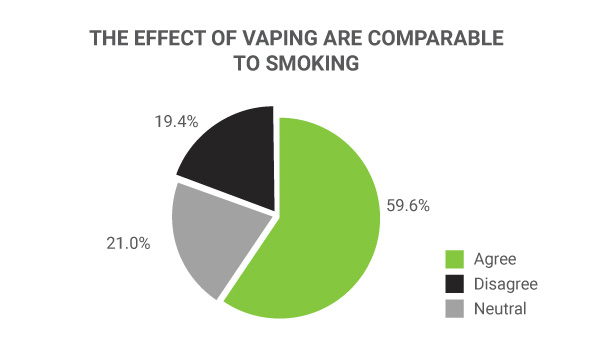 When it came to the issue of whether the effects of smoking dry herb are similar to the effects of vaping it, 59.6% agreed with this statement. 19.4% of respondents disagree while 21% aren’t sure. 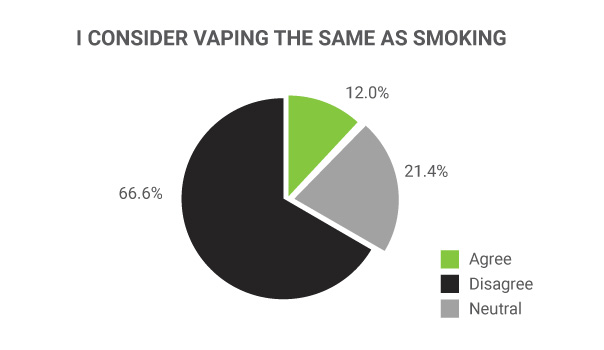 Over 66% of respondents have marked that they do not consider vaping the same as smoking. This shows that to the perception of the consumer there are distinct and fundamental differences between the properties and effects of consuming dry herb via smoking versus vaping. 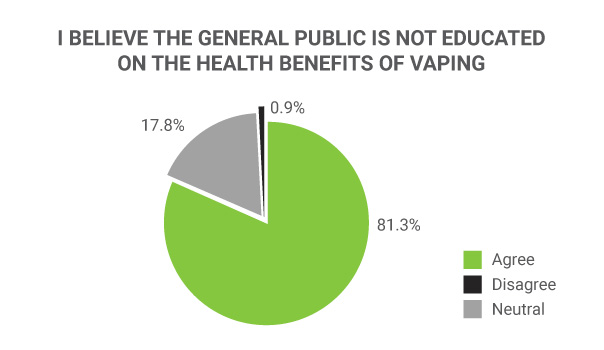 The survey results here point out that there is an overwhelming notion held by those that vape that not enough reliable information is made available to the public as to the overall health benefits of vaping. The root cause for this possibly stems from the fact that there are currently little to no distinctions made between smoking and vaping to the perception of the general public. Therefore it’s likely that much of the known harmful effects of smoking continue to be attributed to vaping as well. 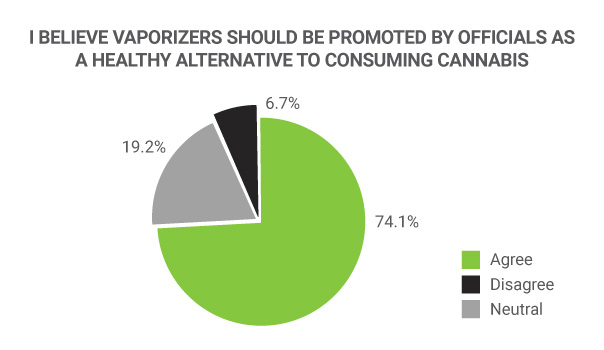 74.1% of those who’ve responded to the survey feel strongly enough about vaping that officials should start promoting it as a healthier alternative to smoking. 19.2% were undecided and only 6.7% disagree with tzhis statement. 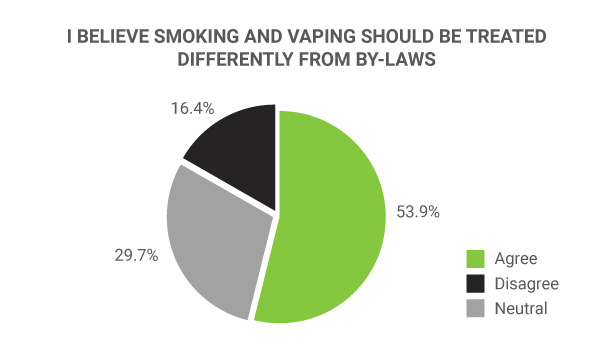 In terms of whether vaping and smoking should be given their own by-laws, only 53.9% of respondents agree while 29.7% are on the fence with this. 16.4% outright disagreed with having separate by-laws for smoking and vaping. 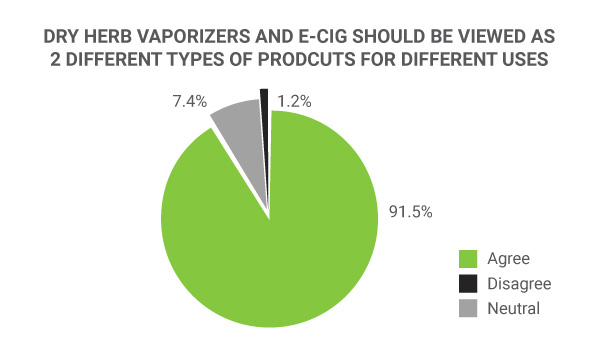 An overwhelming 91.5% of answers feel that a clear distinction has to be made between dry herb vaporizers and e-cig devices. This is likely due to the fact that e-cigs are designed around the consumption of nicotine while vaporizers are made to vaporize dry herb, both of which are two very different products altogether. 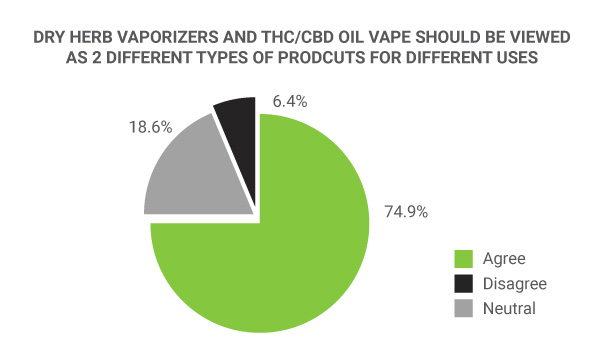 Given how the overall safety of consuming oil-based cartridges have recently come into question, 74.9% of respondents feel that it is important that dry herb vaporizers should be considered as a different product from oil based vape pens. Only 18.6% are undecided while 6.4% disagree that these two kinds of vaporizers shouldn’t be lumped together as one type of product

We here over at TVape aren’t medical experts by any means whatsoever. Jumping to conclusions such as “Vaping is good for your health” isn’t our forte. Smoking and it’s harmful effects on the body is a conclusion derived from years of peer reviewed studies. It’s a bit too early to jump the gun as far as vaping is concerned.

While the survey data we’ve provided might be anecdotal, we also believe that it’s a good step in the right direction as far as harm reduction is concerned. While the jury isn’t out yet on whether vaping is safe, the data indicates that there are some helpful benefits from switching from smoking to vaping. Not only is vaping more discreet due to the minimal odor it produces, it’s also reported to be more economical when it comes to dry herb consumption. Personally speaking, it also tastes a whole lot better and is easier on the throat compared to smoking dry herb.

Hopefully in the coming months and years we’ll see vaporizer technology evolve further. Maybe more light will be shed upon its actual effects on one’s health. As cultures and government policies shift towards tolerance and eventually pushes vaporizing toward the mainstream, we’ll definitely get a better view and more conclusive evidence that using a vaporizer is indeed the better choice. For now however, we’re just basing it off pure feel.

RELATED:  Finding Cheap Marijuana Seeds Available: What Do You Look For?

What Are the Differences Between E-Cigarettes and Shisha?

What Are Various Deficiencies in Cannabis Plants?

Do Vaporizers Save You Money?