Article reposted with permission from Tvape

What’s the best temperature to vape cannabis? That question might be one of your first if you’re new to the world of dry herb or cannabis vaporizers. In this blog post we will provide some advanced insight into the temperature setting that can play a role in the vapor quality.

For a little background information, the goal of vaporization is to convert the compounds and essential oils in your botanicals into vapor, or gas form.

This is done by heating them to a certain temperature range, to vaporize efficiently and avoid combustion. Some botanicals have several different compounds you may wish to vaporize, and by understanding how different temperatures affect and release the active components in your botanicals you can control your vaporization experience.

Each vaporizer is different

Most devices allow you to set your own exact temperature, or at least choose from different available presets. If you’re particularly new to the world of vaping weed, you might not know where to start at all! We’re here to give you a deep and comprehensive overview on setting the best temperature for your vaporizer!

Every botanical’s combustion point is slightly different due to moisture content, but in general, combustion occurs at 235 degrees Celsius. Combustion burns and releases, along with the essential oils, harmful by products such as tar and carbon monoxide through smoke. Avoiding these harmful by-products by vaporization is just one of the reasons many people find vaporization to be a healthier alternative to combustion-based smoking and therefore note the benefits of vaporizing.

There is also the decision of whether you want a convection vaporizer or conduction vaporizer. Conduction & convection devices produce different results with even different flavors, our vaporizer buyers guide goes into this in more depth, but we will go over the principles quickly.

Conduction vaporizers like the Davinci IQ2, heat the herbs with direct contact to the heating source. In the case of the IQ2 and a lot of vaporizers, the chamber is made of ceramic, however other materials are also used, like stainless steel, aluminum, even gold.
Conduction vaporizers tend to produce much less vapor at lower temperatures, especially below 200°C or  392°F. They produce more vapor as you increase the temperature. Stirring is also important with these types of vaporizers.

RELATED:  Five Beginner Cannabis Growing Mistakes And How To Avoid Them 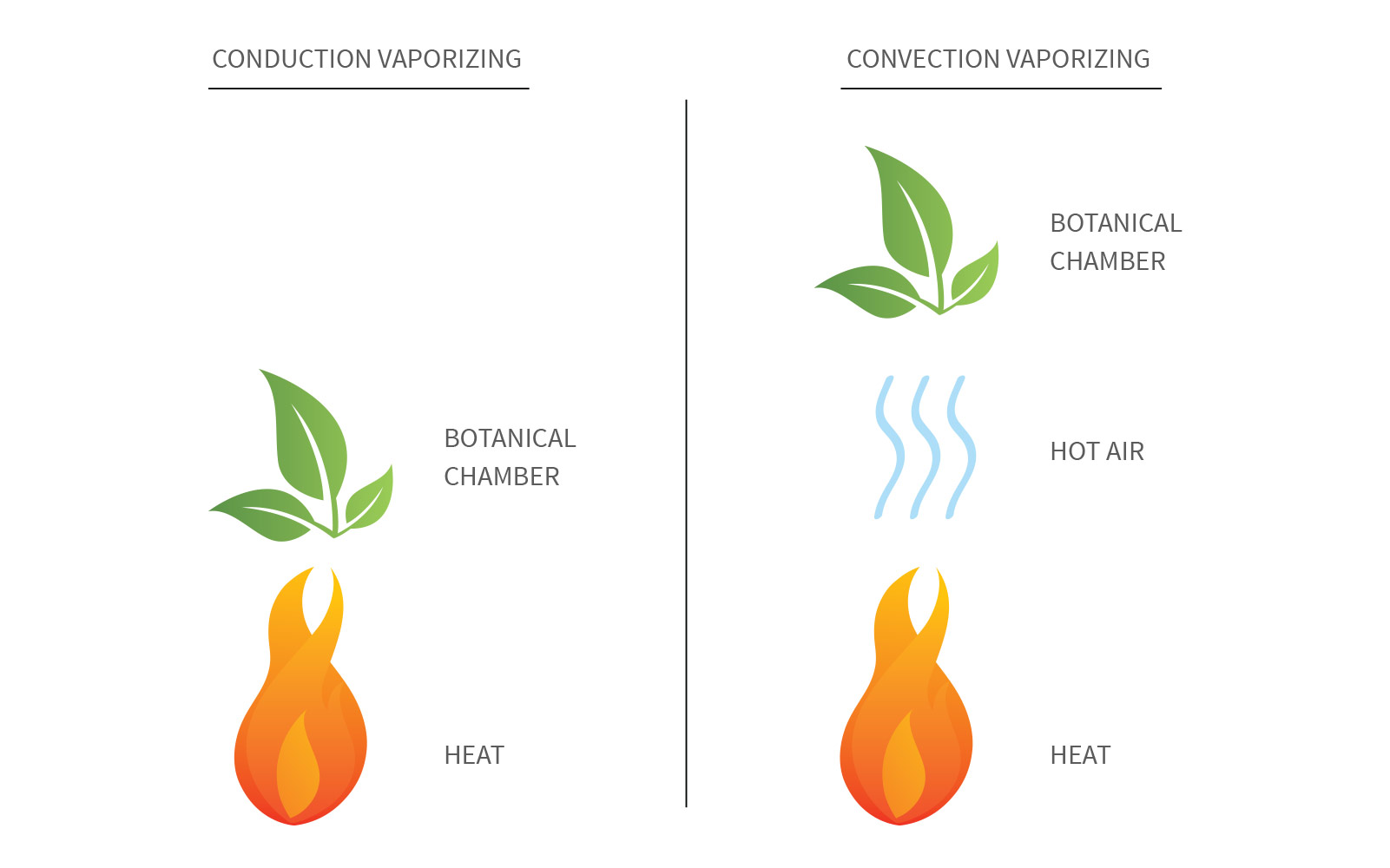 Vaporization temperatures greatly effect the quality of your vapor by releasing different amounts, and types, of compounds released at different temperatures. For example, at a lower vaping temperature, approximately 190-210 degrees Celsius, you will receive thin & wispy, yet very flavorful vapor. This is very evident in vaporizers like the Arizer Air 2 which has a glass mouthpiece to help preserve flavor.

In most botanicals, the first compound to vaporize, as it’s boiling point is the lowest, is terpenoids. Terpenoids are the ‘flavor and aroma’ compounds. Terpenoids, although most noticeable due to its properties, are not the only compound that can be start vaporizing at a lower temperature.

Those who prefer thicker, denser or more visible vapor should consider vaporizing at temperatures between 210 – 235 degrees Celsius on the ideal vaporization spectrum. A unit like the Utillian 620 has a digital display that will allow you to dial the vaporizer right into this range.

How do I set temperature on my vaporizer to get the best vapor quality?

We can split the temperature range into 3 different setting to make it simple. Check out our vaping temperature chart below. Each strain will have notably different effects, flavors and odors emitted from them, so it’s a good idea to do a bit of research on the strain you’re about to use.

Time of Day: The lower end of the temperature spectrum is great for those looking to consume there herbs during the day as it produces the lightest effects.

Time of Day: The middle of the temperature spectrum is best suited for afternoon use with the effects of your herbs being more pronounced at this temperature.

Time of Day: The high end of the vaping temperature spectrum is best suited for nighttime use with the effects of your herbs being the most pronounced at this temperature and will engage terpenes that some use to promote relaxation and sleep.

The most common vape temp is between 190 to 235 degrees Celsius (374 to 455°F). To make things simple to understand, I will divide the heating techniques into three categories: Vapor Shocking, Vapor Tasting and Vapor Stepping.

Anyone who has smelled the cannabis plant has noted its unique and pungent odor. These odors are created through the terpenes found in the trichomes of the plant.

Terpenes are oils that exist in a large variety of plants giving them their unique aroma’s and flavors. The cannabis plants shares terpenes of other plants as well as having its own unique terpenes which add the plants overall profile. These scents can range from earthy, skunky to sweet and citrusy and each strain will have its own unique aroma.

Though there are over a hundred different terpenes around, we’ll go through the 7 most common terpenes found in cannabis. Each one has a distinct aroma/flavor, therapeutic properties and boiling point.

Having access to vape temperature control and being able to manipulate the boiling point/temperature at which you use your herb with a vaporizer can be a valuable tool in dialing in the perfect experience. In conjunction with the different boiling points of various cannabinoids, using the power of terpenes can yield you some results never thought possible!

RELATED:  Maximizing Your Pot-ential: How To Roll a Kief Joint

Other: Alongside beta-pinene, alpha-pinene is one of the most common terpenes found in nature. Largely responsible for a woody/earthy scent in any cannabis strain, it’s also suggested to partially aide short term memory and wakefulness.

Other: Myrcene is one of the most common terpenes found in fruits such as mangos. Largely responsible for an earthy scent, myrcene helps with the permeability of cell membranes helping increase the transportation of other cannabinoids.

Other: Another one of the most common terpenes found in nature, limonene is very common in any citrus-themes strain. Limonene is also thought to be partially stimulating and to promote wakefulness.

Other: One of the most common terpenes found in cannabis plants, Beta-Caryophyllene was actually found to enhance the efficacy of anticancer drugs alongside its relative, humulene. The aroma is also suggested to produce slightly stimulating effects.

Other: Used in around 60-80% of household cleaning and personal care products, linalool is extremely common. Known for its relaxing, stress-relieving and sedatives, lavender and its terpene linalool has a long history of use.

Other: Similar to its sibling β-caryophyllene, humulene synergizes well with its brother for its medical properties. In differences, it has a slightly different fragrance and boiling point than its brother. It is noted to have a stimulating and refreshing aroma.

Other: Another terpene widely found in nature, ocimene was found to have strong antifungal, antiviral and anti-inflammatory properties. The fragrance is also thought to be slightly stimulating and promoting clear-headedness.

There is no single best temperature setting for a vaporizer. Everyone has a different preference and some temperatures are better for different times of day.

It is possible however to tailor your experience by releasing specific cannabinoids and terpenes. Use the information provided here to help fine-tune your experience to what suits you best and be sure to check out this year’s best vaporizer ranking chart to help find the best device for you.

What Are the Differences Between E-Cigarettes and Shisha?

What Are Various Deficiencies in Cannabis Plants?

Do Vaporizers Save You Money?