Bong History 101: Where Did Water Pipes Come From?

A bong or a water pipe is an instrument most commonly used for smoking cannabis. This is a healthier and less harmful way, either when smoking, to get medicated, or to just jive with the vibe.

It works the same way as your regular pipe would, except that it has a cleverly designed filtration system that helps eliminate most of the harmful substances in cannabis smoke without compromising the psychoactive qualities of your favorite strain. 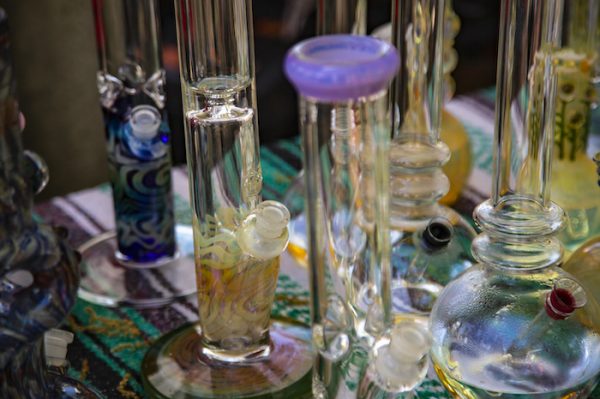 A bong has several parts that work together to deliver clean yet massive hits. The filtration process begins when you pack the bowl and fire it up.

The bowl is usually a detachable one-hitter that is typically the size of a thimble or sometimes smaller. Within it is a screen that filters particles like ash and tar from the burning skunky, funky, smelly green stuff. Anything that could escape it will then be filtered by the water inside the chamber.

As you inhale from the mouthpiece, the smoke from the bowl travels through the downward stem then goes through the water carried by bubbles that fizzle and pop to the surface, thus, releasing a cooled down, purified smoke that swirls around the chamber until it accumulates into a dense, white cloud. Once all of what’s left in the bowl has burned, remove the bowl and inhale full-throttle until all that smoke goes straight up your dome and takes you on a magic carpet ride.

Bongs have evolved from primitive underground pipes to more portable handheld designs. The use of bongs has become popular throughout America around the 60s and 70s and grew even more popular when lampworker and engineer, Bob Snodgrass artfully designed glass bongs using the ‘fuming process’ which created the iconic psychedelic aesthetic that is still used in today’s bongs.

However, sales and transport of ‘drug paraphernalia’ were made illegal by U.S. laws in 2003, which disrupted this movement.  Bong businesses were shut down, and online sales went kaput.

Subsequently, the legalization of Cannabis in many states and countries paved the way for a bong renaissance. Bongs are now more artistically designed, making them objects of interest for collectors and cannabis enthusiasts alike—the same way they were valued by the royalties of ancient times.

Online stores, such as Daily High Club, offer a collection of uniquely designed bongs tailor-fitted according to your personality and preferred smoking experience.

Blast from the Past

Although information as to where the bong originated is still elusive, here are some places where ancient bongs were discovered:

The oldest smoking apparatus that was similar to the a was discovered in Africa by J.C. Dombrowski and was found containing cannabis residue. It was said to have been used by placing cannabis on top of hot burning coals then inhaled through a mouth tube that goes through an underground duct—unlike the handheld bongs we know today.

The earliest handheld bongs dated back to 1100 and 1400 CE and were also discovered in Africa. A total of eleven bongs were found in an Ethiopian cave and were made of repurposed pottery and animal horns.

In 2013, a pair of bongs made of gold was found by construction workers during excavations of a kurgan in Russia. Experts believed that these archeological finds belonged to a fierce nomadic group known as the Scythians.

The bongs were found containing opium and cannabis residue and were buried with 7 pounds of other golden artifacts that were thought to be part of a tribal chief’s burial mound.

This evidence suggests that Scythian tribal chiefs from 2400 years ago smoked opium and cannabis to embolden themselves before battle. They must have been influenced by the substance when they decided to just dominate the vast grasslands of Eurasia.

Empress Dowager Cixi from the 16th century Ming dynasty treasured her bongs. She was even buried with at least three of her prized bong collections that are now displayed in the palace museum.

Also, in the 16th century was the first written record of the use of bongs in Central Asia. The word ‘bong’ was derived from the Thai word ‘baung,’ which is referred to as a cylindrical wooden tube made of bamboo and was particularly used for smoking. Bamboo bongs are found predominantly across Central Asia.

It was since then that the use of bongs was introduced to the world.

Records show that taking hits from the bong is an old custom practiced throughout history among different cultures and traditions.

It was found to have been widely used for smoking different types of herbal substances across the globe, such as cannabis and opium, and has been the most preferred smoking apparatus for the past centuries until today. This is because of its simple yet sophisticated filtration system that provides a cooler, cleaner, and smoother toking experience.

Besides its essential use, the rich history that surrounds the bong has given it a reputation and appeal to a wide range of people.

Most of the ancient bongs that have been discovered are made of meticulously crafted precious metals and other such materials; some are even adorned with gems and jewels. These discoveries tell us that before the bums and hippies, elite stoners with fancy bongs walked the earth.

Also, these revelations from the past seem to paint a less morbid picture of how the punishment’ stoned to death’ was done.

Scott Briones
Scott was born in San Rafael, CA, home to the high school were "420" was popularized. He has been writing for more than 5 years about the cannabis industry. He loves to race his car and has just fulfilled his dream of racing at the Nurburgring in Germany

What is CBD Oil And Its Top 5 Benefits?

What is a Zip of Weed and How Much Does It Go For? [Weed Measurements]

How to Make Cannabis Gummies in 9 Easy Steps

How to Make Cannabis Infused Butter in 3 Easy Steps

How to Make Cannabis Infused Coconut Oil in 3 Steps

Is it Safe to Drive on CBD?

4 Reasons to Check with Your Doctor Before Using CBD

What is CBD Oil And Its Top 5 Benefits?

What Is the Best CBD-Infused Product for You?

5 Reasons to Choose Quick Delivery for your Next CBD Orders

Best Dab Strains You Should Try

How is Fresh Weed Important for The Best Weed Experience in Surrey?

Everything You Need to Know About Choosing a Cannabis Humidor

Living in Canada and Want to Buy Weed? Here are all the Benefits and Risk of Consuming It