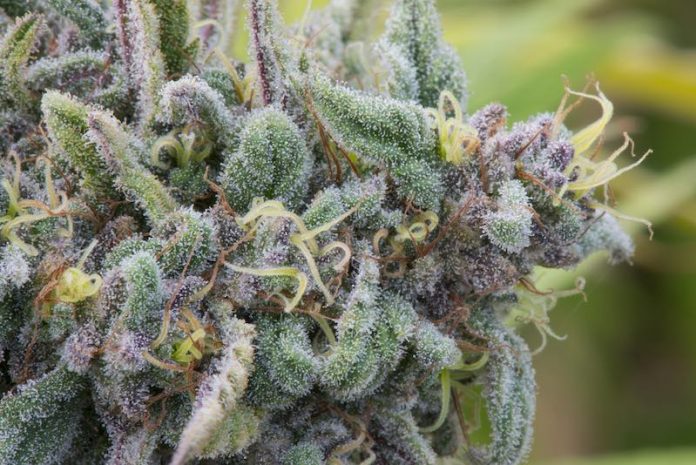 Some love it and some hate it, but everyone who’s tried it can agree: the smell of cannabis is a distinctive part of its consumption experience. There’s actually a term for the unique chemical compounds that are responsible for cannabis’s aromas and flavors. The next time you see the word “terpene,” you can use your knowledge of it to pick out flowers like a cannabis connoisseur.

Read on below for a briefer on terpenes, how they work alongside cannabinoids, and what the most prominent cannabis terpenes are. This info should broaden your cannabis experience and have you looking forward to your next herb delivery.

What Are Terpenes and How Do They Work?

In layman’s terms, terpenes are naturally-occurring, hydrocarbon-based chemical compounds that are found in the cannabis plant. These compounds are what account for cannabis’s characteristic smell.

Cannabis is by no means the only plant that contains terpenes. Other familiar terpenes that you may know are the ones that occur in aromatic herbs, plants, and fruits like thyme, sage, rosemary, lavender, peppermint, lemons, and oranges—which is why you may be able to pick out these notes when you consume cannabis.

There are several interesting theories about why terpenes occur in plants and how they affect the senses. One theory is that terpenes occur in nature as a way for plants to protect themselves from the elements and from predatory animals. Another is that terpene profiles specifically in cannabis work alongside cannabinoids to yield distinctive cannabis experiences. This is why some people can distinguish their experiences with different strains of cannabis, even if these strains produce the same baseline amount of tetrahydrocannabinol (THC).

RELATED:  Recreational Cannabis Leaves Many Medical Patients in the Dust

It’s important to note that terpenes are not intoxicating on their own, and by themselves, they typically cannot induce the same analgesic, anti-inflammatory, or psychoactive effects that cannabinoids can. But terpene profiles matter among ardent fans of the herb because they are said to heighten the sensory aspects of the experience in pleasurable and even therapeutic ways.

Perhaps the best explanation for how terpenes and cannabinoids work together is the “entourage effect,” or a reaction that sees a mixture of compounds work synergistically with each other. While cannabinoids induce the bodily effects that cannabis is known for, terpenes will impart unique scents and flavors. Ultimately, this may be responsible for the distinctiveness of each cannabis product you encounter in the market.

What Are the Most Well-Known Cannabis Terpenes and What Are Their Purported Benefits?

Several distinguishable terpenes can be found in cannabis, and some are associated with particular medical benefits. Some notable examples are the following:

RELATED:  Delta 8: Everything You Need To Know

Pinene, which is also found in herbs like dill, rosemary, and parsley, is a terpene that evokes the smell of pine trees. Alpha and beta pinene in particular are associated with having antiseptic and antibacterial properties, being able to heighten alertness and memory, and counteracting adverse effects from THC.

As its name indicates, limonene accounts for the zesty or citrusy scent and aroma that occurs in some cannabis strains. Limonene is linked to improvement of mood, stress relief, and relaxation that brings about better sleep.

This terpene evokes spicy and woody notes reminiscent of black pepper, cloves, cinnamon, black caraway, and hops. It also possesses anti-inflammatory, antifungal, and pain-relieving properties and is involved in the treatment of epilepsy, anxiety, and depression.

Linalool is a terpene that also occurs in the lavender and jasmine plants. Apart from its fragrance, linalool is also known for its anticonvulsant and antidepressant properties. In addition, it is associated with the treatment of chronic pain and sleeplessness.

Myrcene, also called beta-myrcene, is a terpene that imparts a musky or earthy aroma to cannabis. It can also be found in mangoes, hops, thyme, cardamom, ylang-ylang, and lemongrass. Known as a compound that gives cannabis its sedative effect, myrcene is powerful against afflictions like insomnia and anxiety.

Bisabolol is a terpene with a characteristically sweet, citrusy, or flower-like smell. It can also be found in chamomile and candeiaplants. Alpha-bisabolol contains anti-irritant, antimicrobial, and antioxidant properties. When paired with THC, bisabolol may heighten cannabis’s psychoactive effects.

Cannabis has a long history of being used in folk and traditional medicine. Knowing what we know now, it’s not hard to attribute some of those healing properties to the presence of terpenes.

As someone who delights in the herb, try to do some additional research on terpenes and check out which terpenes stand out in the products that you buy. Doing so can deepen your awareness of what cannabis can do, and therefore heighten your enjoyment of it.