Jason Santos of BurnTV: Creating an Entertainment Platform for Cannabis 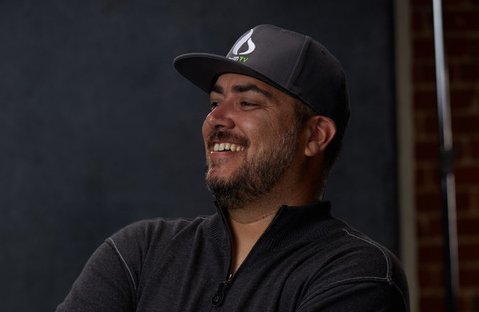 Jason Santos is the CEO of BurnTV, a Netflix-type digital lifestyle and entertainment platform embracing the legal cannabis industry.

We recently invited Jason for a Q&A session to talk about his background and his company.

Ganjly: What is your background and what made you decide to pursue a career in cannabis?

Jason Santos: I was originally a real estate investor who was paying cash for properties using only my money, rehabbing them, and then selling them.  The issue was that I could circle the day on the calendar where I was screwed because money is only going out and not coming in when you are doing a project, so if there were delays or overages it would just continue to bring that date closer.  I had seen an opportunity in the emerging legal cannabis industry and decided to get involved to supplement income so I could put more of my money to work in real estate. But very quickly, the industry grabbed me as more than just a supplemental industry for me.
In fact, everything changed when a patient came into the dispensary I was overseeing who had failed in her attempt to commit suicide from the pain and misery of her cancer battle.  Her daughter brought her in to try cannabis, something she had previously been against. Up to then, they had only tried stuff a friend made for them at home, where she was already gaining weight back but was just too potent.  With only $40 to spend due to financial hardships of battling cancer, I gave her about $150 to $200 in edible products to try them each out to see what worked best for her. When she tried to give me the $40, I told her to keep it because she should only ever need to spend $20 when she goes into a shop, but first we needed to find out what specifically worked for her.  So I gifted her the items as what I felt was just doing a nice gesture to help her out.
What I didn’t realize at that moment was how important it was to her, because for her it was a bag of hope.  A bag that meant she might now be able to spend her remaining days with her grandkids around the breakfast table rather than be in a vegetative and weak state from all the medications she was taking that dropped her weight to the low 80’s from her normal weight of what they said was in the 130 pound range.  She held me for what felt like 10 min crying in the middle of the shop and I realized right then and there this industry was not just an exciting business opportunity but was really important to people’s lives. That moment changed my life forever and I went all in on the industry from that point on and pulled all my resources from my real estate business to focus on making an impact in the industry to create opportunities for people like her to feel like there is hope here, not something that should be seen as doing something wrong.

Ganjly: How many employees does BurnTV have and what kind of traits do you look for when hiring new members?

Jason Santos: Currently, there are 12 core members of the team and several other ones who are part-time, advise, consult, or work on specific projects.  Honestly, this is the single most important thing to me as a CEO: building the right team. I have a quote at the bottom of my email signature that I live by which is, ”If you are the smartest person at the table, then you are at the wrong table.”
To me, nothing is more important than putting experienced and brilliant people around us to execute our vision.  And there are several factors we look at when identifying the right people, and none more important than culture fit.  We are a tight-knit group around here, like a family, so whoever is coming in needs to really understand and believe in our vision and vibe well with how we think and work.  It takes a certain type of person to thrive in a startup environment where the work can be tedious and exhausting long before you start to see returns on that commitment. If you are not totally sold and committed to what we are doing, then you are going to burn out quickly.

Ganjly: What is the most challenging experience you have had in the cannabis industry so far?

Jason Santos: Building a media and entertainment company literally from scratch has a long list of its own challenges.  But if I keep those challenges more specific to the cannabis industry itself rather than building a media company, I think the biggest challenge any company related to the industry is breaking through the stereotypes.  Some people shoot themselves in the foot on this and are honestly very much the stereotype, but others are fighting every day to continue shift perceptions. People still seem to think that money just rains from the sky and everyone here is standing in it with buckets to collect it all while smoking blunts all day.

Ganjly: What is your proudest moment since you started down this path of being an entrepreneur in the cannabis space?

Jason Santos: Honestly, I would say its the team around me.  Having so many incredible people around me who believe in me and this crazy idea I wrote down on a napkin is easily the thing I am the proudest of.  It validates everything I believed from the start and their confidence in me and BurnTV fuels me every single day, especially during the most challenging moments.  This includes my entire staff, the types of consultants and advisors that are around us, the quality of our investors, and all the incredible companies and brands that want to work with us, especially the non-cannabis industry companies including some of the largest entertainment companies in the world.  It’s a testament to the vision and makes me proud that we have been able to attract so many great people and companies around us.

Ganjly: Do you have plans for new products, services or events and would you be willing to drop any hints about what we can expect from BurnTV in the future?

Jason Santos: Oh man, the things I wish I could tell you right now!  For instance, we have something in the works that would be a global game changer for anyone related to the cannabis industry.  Honestly, I don’t know yet if we can pull it off or not, but it’s very close to becoming official. The one thing we will never do is announce things that are not 100% official, we aren’t interested in BS fluff.  But, if we can close this deal, it will be a game changer and we would be the first in the entire world to have accomplished this. I know that doesn’t help you here on this question, but it’s the best I can do right now.
The one thing I can share with you though is that we are very close to releasing our first app, which will be available on iOS and Android mobile and tablet devices with our OTT apps coming shortly after.  We will be releasing the official launch date of those apps in May, so people can keep an eye out for that on our social media and our website. Speaking of the website, we also will be launching our expanded website in the coming weeks. Additionally, we have a ton of other news related to deals, live events, etc that will be coming out over the next couple months as well.

Ganjly: What is your advice for hopeful cannabis entrepreneurs who are considering joining the cannabis industry? What are the positives and negatives they should expect?

Jason Santos: My advice is to focus on where the industry is going and not where it has been or even where it’s currently at.  I still see so many people trying to get into the industry that is still coming from old stereotypical mindsets.  If you are getting into this industry because you think it will be easy money and you will get to smoke weed all day, then good luck, you probably won’t last long.  This is an exciting and booming industry that is ripe with opportunity. But, the “wild wild west” days are long gone, now there is regulation, tracking and real industry here.  Be prepared to work for it, and work hard for it, and look to position your brands as mainstream businesses that cater to the masses, not the niche stereotypes if you want to have staying power and attract good investors and partnerships.

Thank you so much, Jason, for taking the time out to talk to us!

To learn more about his company, go to BurnTV.