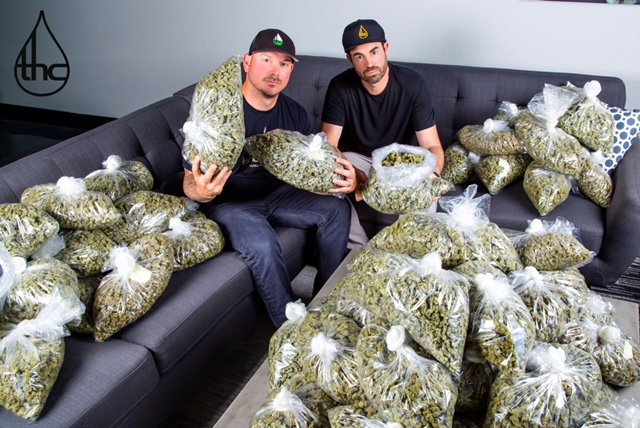 Ray Schiavone is the Co-Founder and CEO of @TahoeHydro. Tahoe Hydroponics Company or Tahoe Hydro is an award-winning cannabis cultivation company that is owned and operated by two families that have been growing cannabis for generations.

They have won every single competition they’ve entered their cannabis into, including winning the 2016 & 2017 Jack Herer Cup for indica, sativa, and hybrid flower.

Together, they have grown thousands of different strains and have gone through years of pheno-hunting and crossbreeding to use only the highest quality genetics possible.

Their entire business model is based on producing ultra premium cannabis at nearly half the cost of their competitors, even though their flower is some of the most expensive on the market.

In addition to their strain expertise, they are also experts in running a cannabis business. Tahoe Hydro is averaging 45-65% profit and they did approximately $1M last month in sales.

We had the opportunity to interview Ray and learn more about Tahoe Hydro as well as the state of the leaf in Nevada. Read the full interview below.

Ganjly: How did you first get started as a professional grower in the cannabis industry?

Ray Schiavone: My partner and I have both grown up in families that were cultivating cannabis. I think I speak for both of us when I say it has always been a passion of ours. As far my own experience, I woke up one day with the realization that I wasn’t passionate about the businesses I currently owned. I had a couple financial service related businesses. I was making good money and enjoyed the financial freedom, but I wasn’t passionate about it and never really dreamed about it. When I found out about the opportunity in Nevada, I jumped on it and I systematically began winding down my other businesses so I could focus 100% on cannabis. I literally dream about new products or breeding almost every night. That is usually a great place to be in business.

Ganjly: For outsiders to Nevada’s cannabis industry, what should they know about the space? And how would you describe Tahoe Hydroponics Company to them?

Ray Schiavone: I think as an outsider you have to be extremely skeptical about jumping into cannabis at this stage. Mark Cuban said it best, “innovator, imitator, idiot”. This industry has been in the idiot stage for a while now. This industry is much more difficult than all the other businesses I have ever had. If I didn’t love what I do, I would have stayed in the financial industry. Tahoe Hydroponics is the undefeated Jack Herer Cup award winner for ultra premium flower in the state of Nevada two years in a row. It specializes in producing high THC and Terpene based flower.

Ganjly: With wholesale cannabis prices often plummeting within legalized industries throughout the U.S., how are you able to keep your revenue from doing the same?

Ray Schiavone: This is an excellent question. There is only one product that seems to be impacted the least in a compressed market. Ultra premium indoor flower still holds a good price tag in markets like Oregon. It is the lower to middle quality flower where everyone is fighting to make a sale or forced to make concentrates. Tahoe’s entire business model is focused on producing modern ultra premium cannabis at nearly half the cost of our competitors.

Ganjly: What has been the biggest challenge or obstacle you’ve had to overcome so far?

Ray Schiavone: I think the biggest challenge initially is making sure you have the right engineers. They all say the equipment meets the needs we have. What they don’t understand, is the impact plants have once they make it into the environment. If their calculations are wrong, you just spent millions or more dollars on an environment that is impossible to produce product that can pass testing. Many cultivators in Nevada have had to redesign the HVAC systems in their facilities.

Ganjly: And what is the most rewarding experience you’ve had?

Ray Schiavone: Patients in Nevada are constantly sending us their stories about how our cannabis has impacted their lives in a positive way. There isn’t anything more rewarding then that.

Ray Schiavone: Nevada has become one of the most stable markets in the country. I think everybody underestimated the power of tourism in Nevada. We were expecting our prices to go down. They have been steadily going up and are approximately 40% higher then all of our original projections when we entered the market. The approval of on site consumption and this next round of licenses will also increase demand. When the state doubles the amount of stores and adds smoking lounges, it will take a while for the supply to catch up to the demand.

Ganjly: What advice would you offer to somebody who wants to become a commercial cannabis cultivator?

Ray Schiavone: The best advice I can give anyone would be the same principle you can use in any  industry. Find an industry leader and learn from them. Anytime you are in an environment where everyone is succeeding, you develop a strong foundation for success.

Thank you so much Ray for taking the time to do the interview. We learned so much from you. To know more about Ray and his company Tahoe Hydro, go to TahoeHydro.com

RELATED:  Dr. Trina Hazzah: Founder of The Veterinary Cannabis Society and Green Nile Educates Us About Cannabis for Pets

Best Cannabis Products and Accessories to Buy in 2021

The Medical Benefits Of Cannabis