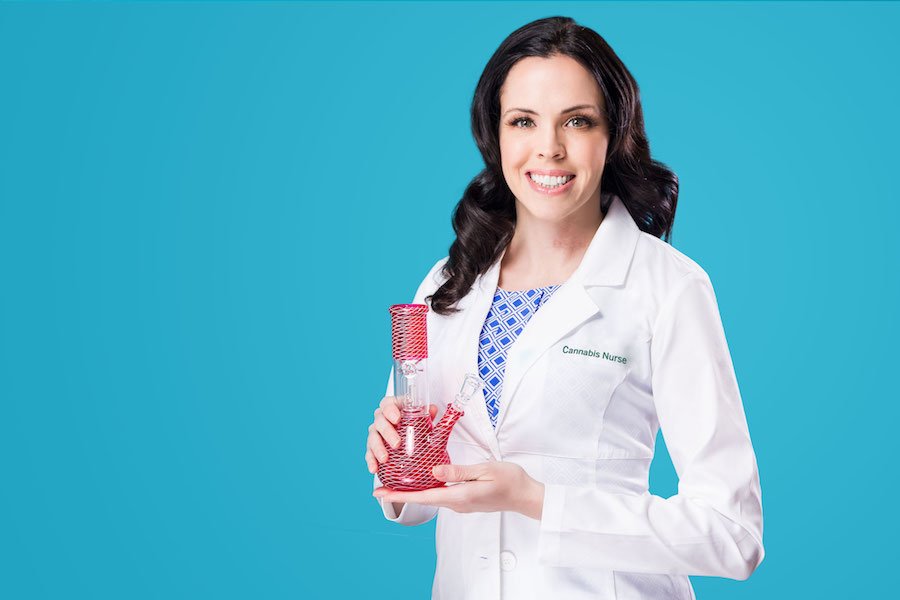 Jessie Gill, RN, @Marijuana_Mommy, is a cannabis nurse with a background in holistic health and hospice. After suffering a spinal injury, she reluctantly became a medical marijuana patient then quickly transitioned into an advocate.

Her site, MarijuanaMommy.com educates about cannabis while challenging the stigma against marijuana use.

She’s been featured on Viceland and her work has appeared on VICE, GoodHousekeeping, Cosmopolitan, MSN, and more.

We were able to get a chance to interview Jessie and she shares to us her background and important tips on how to safely medicate on cannabis at home, how to talk to your kids about cannabis and its risks.

Ganjly: We love your website and we love what you do. Can you tell us how you got introduced to cannabis? And what inspired you to make MarijuanaMommy.com?

Jessie Gill: Thank you! It’s been a wild journey. I certainly never thought I’d be teaching about marijuana.

I was working as a hospice nurse several years ago when I was injured in an accident. My nursing career ended and I started this long horrific journey to try to get better.

After trying every conservative treatment, I had a multi-level cervical spinal fusion which made me worse.

Eventually, I was living life dependent on opiates, valium, Lyrica and a bunch of other medications, but I was still living with unbearable pain and the meds added troublesome side effects.

I was miserable and depressed. A friend suggested I try cannabis.

Now, I wasn’t cannabis naïve, but it had been years since I’d tried it. I really didn’t understand the plant at all and as a parent the stigma scared the crap out of me, so I was super resistant. In the end, my mom (who’s also a nurse) convinced me to try it.

The first day I tried MMJ, I was able to stop opiates and Valium. I still have tons of challenges but within a year, I was off of almost all the pharmaceuticals and feeling better than I had since the accident.

I knew my experience was similar to so many others, and I could see the lack of relatable information out there so I started MarijuanaMommy.com to teach about this remarkable plant and how to use it all while fighting the stigma.

Ganjly: We heard you put up a billboard ad in New Jersey. Can you share to us your experience and how you solved the difficulties in cannabis advertising?

Jessie Gill: Yes! That was a fun 4/20 project. But honestly, it didn’t solve any advertising problems. Unfortunately the media company banned me from showing my “medication administration device” (aka bong).

Even though, the same media company allows ads with guns and alcohol pictured. It was frustrating and just one of the many issues we face in cannabis advertising. There are silly restrictions.

Ganjly: What is the most important thing to tell your kids about cannabis?

Jessie Gil: There are two things parents really need to communicate to their kids about cannabis.

The first is the law. The most dangerous thing about cannabis is the law. In many places, being arrested with cannabis can seriously derail a child’s life. It’s a sad but true reality.

Second, parents need to discuss psychosis with their kids. Now, keep in mind there’s still a ton of research that needs to be completed.

But, we suspect that some people who are have a high risk for psychosis might react poorly to some strains of cannabis.

Because of this, it’s important for kids (and adults too) to know their family history of illnesses like schizophrenia so they can properly assess their risk.

Ganjly: In your experience, what is a good age to start talking to your kids about cannabis?

Jessie Gill: Every situation is different, but like all complicated topics there are age-appropriate discussions that should happen at every age level.

In our house, I always have cannabis around, so like alcohol, or knives, or even Tylenol, I’ve taken steps to store it responsibly and teach that it is not for kids.

My nieces are around a lot, the youngest was 3 or 4 when she learned about my unique medicine.

My son was in 3rd grade when I became a patient. For him, I knew it was really important to educate him about the stigma and prepare him for the propaganda he’d see in school so he wasn’t frightened by it.

Ganjly: Is it okay to smoke cannabis in front of your kids?

Jessie Gill: Well, I mostly vape, but I know what you mean.

As long as it’s done responsibly and legally, sure. It can be treated just like alcohol.

Ganjly: Can you overdose from marijuana?

Jessie Gill: You CANNOT fatally overdose from cannabis. You can consume too much and sleep like you’re dead, but you WILL wake up eventually.

One of the most common signs of overconsumption is anxiety and panic attacks, but they too wear off eventually.

Like all adult substances, cannabis should be used responsibly in moderation. It’s VERY easy to overconsume.

Ganjly: We have constantly talked about the benefits of marijuana but can you share to us the risks that our kids should know?

Jessie Gill: Sure besides understanding the law and knowing their family medical history.

Kids should know that we still don’t know a lot about cannabis yet. For over 80 years scientists weren’t allowed to study it.

The thing is kids’ brains have not finished growing yet, and doctors worry cannabis could negatively impact brain growth during this time of rapid development.

We need decades of research before we’ll really know more.

Ganjly: What are other tips and advices you can give to the parents with kids who are medicating with marijuana?

Jessie Gill: Parents who consume should be educated and prepared to discuss the topic eloquently.

They should remember cannabis is still federally illegal and a lot of people don’t understand it, because of this, parents may need to politely educate teachers, parents of their children’s peers, and even child protection services, if heaven forbid they should show up.

Parents should also keep in mind, what their kids are learning at home and what they’re being taught in school is very different.

The most important thing is to teach our children about cannabis-both the benefits and risks-in a stigma free manner.

What we teach them now, shapes all of our futures.

Thank you so much for your time Jessie! We really appreciate all the tips and advices you gave us. To get to know Jessie more, head on over to her site MarijuanaMommy.com. Jessie also shares her cannabis recipes to us. Head on over to our recipes section.

Kim Stuck: Implementing Compliance and Safety for Cannabis and Psilocybin for Companies [and Effects to Consumers When Companies Aren’t Being Safe]

Tahir Johnson: The Importance of Social Equity, Inclusion and Justice in the Cannabis Industry

Dr. Trina Hazzah: Founder of The Veterinary Cannabis Society and Green Nile Educates Us About Cannabis for Pets